“Yes, I'm rich! And I don't mind paying more at a restaurant than everyone else here. Please bill me as much as you want!”

No, I didn't say that. And I never will.

At Soma, a fancy seafood restaurant in Arba Minch, Southern Ethiopia, they think that foreigners don't mind being overcharged. In fact, they have posted their two menus side by side. One in English – for tourists – with higher prices, and one in Armaric writing – for locals – with lower prices. As though all foreigners would happily pay up to 50 percent more than the people at the next table.

Would an Ethiopian be treated the same way in New York? Never.

Eduardo and I decided to make a scandal and teach them a lesson.

“Sir, can we have the check, please? But with these prices,” we pointed to the menu in Armaric.

The waiter, dumbfounded, tried to understand. He pointed at the menu in English. Surely we would like to pay the higher prices, not the lower ones

“No, we want to pay these prices,” Eduardo repeated.

The waiter shook his head and disappeared into the kitchen. 5 minutes went by. Then 10 minutes. 20 minutes. Nothing.

“Sir, we are still waiting for the check. But with these prices.” Eduardo called out, as the waiter tried to sneak by us to serve other, less argumentative clients.

A local man at the next table got involved, spoke to the waiter, then explained to us:
“You have to pay the tourist prices.”

Eduardo explained: “If you came to my country, would you like to pay higher prices than everyone else in a restaurant just because you're a tourist?”

The coin dropped, and the local man started arguing our cause. But as he was celebrating his daughter's graduation, we thanked him and told him he didn't have to get involved in our case.

When the waiter finally gave us the check, only verbally, it was based on the tourist menu. 108 Birr.

So, we decided to write our own check, using the prices on the local menu. We left the 78 Birr on the table (no tip) – and walked away, looking over our shoulders to make sure no angry mob was following us.

The $2 we saved is not a lot of money, but it's the principle of the matter that counts. Why should tourists always get overcharged?

Refuse to be overcharged!!! 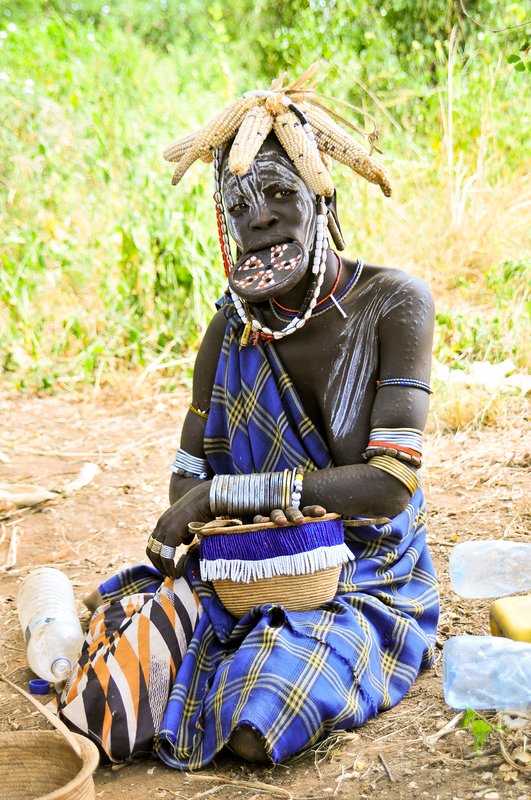 In the Lower Omo Valley in South-West Ethiopia, every tribe has its own standards of beauty. The Banna twist their hair into yarn-like strings and then color their hair red with mud. The Surma paint their bodies with a white chalk-mix. The Karo adorn themselves with jewelery made of all sorts of junk (pens, cans, candy wrappers). The Hamer women wear iron chokers showing whether they're the (more important) first wife, or the second wife. And the Mursi insert clay plates in their lips, the bigger the better. 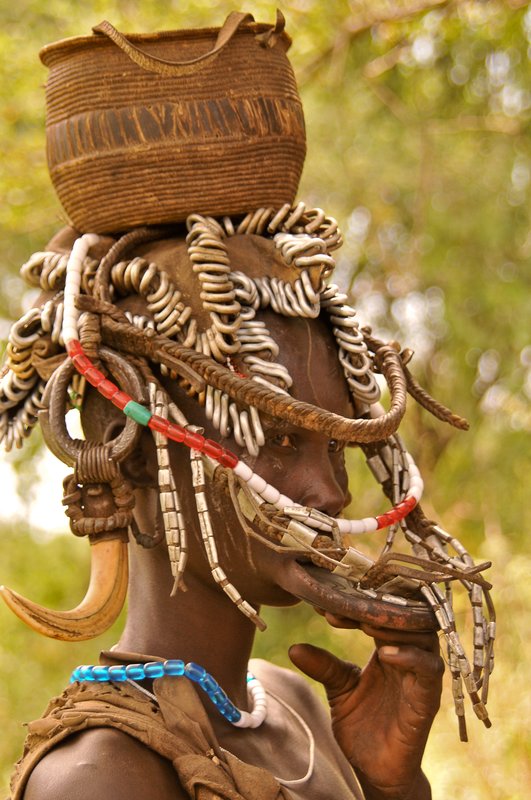 Traveling to the area south of Arba Minch is a bit like entering a parallel universe. The markets are filled with people with the most incredible outfits and styles. This is the Africa I read about as a child, in the National Geographic. Bare-breasted women with corn in their hair. Scrawny adolescents with leg-bracelets made of beads. Pretty girls with their two lower front teeth pulled out for the sake of fashion. It seems unlikely that they didn't dress up like this just to impress visiting tourists. But this is actually what they wear, their style, their culture. Their taste. 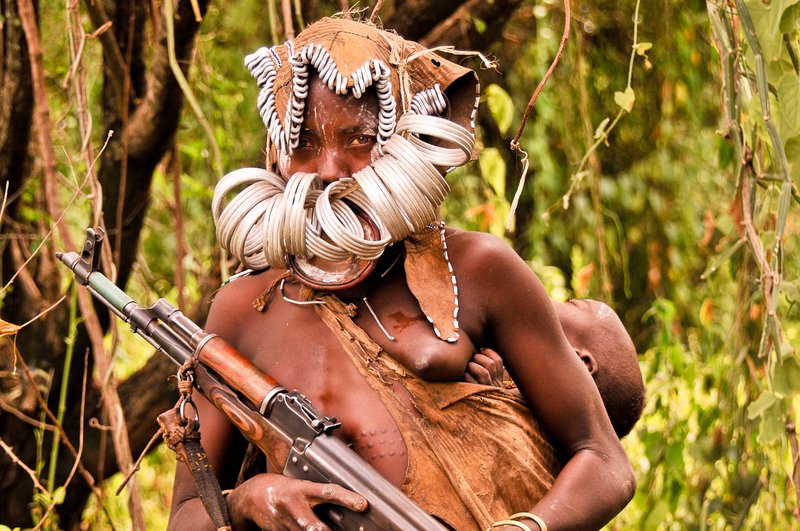 Our guide, Wasagne, told us about an anthropological study from a few years back. They brought a Mursi man to Addis Ababa, to Bole Street where the most beautiful Ethiopians hang. They asked him to pick out the most gorgeous woman, but he couldn't. According to him they were all ugly because none of them was wearing a lip plate.

Someone compared the Lower Omo Valley with a human zoo, and that is a rather accurate description. The tribes go crazy for tourists that pay a few cents for each photo. Everyone tugged at our sleeves, scratched our arms and used sweet words, winks and threats to get their photos taken. Unfortunately we are part of a tourism movement that will eventually destroy the still-authentic culture of these tribes. Soon enough they will learn what they would have to wear and how to style themselves in order to attract more tourists. 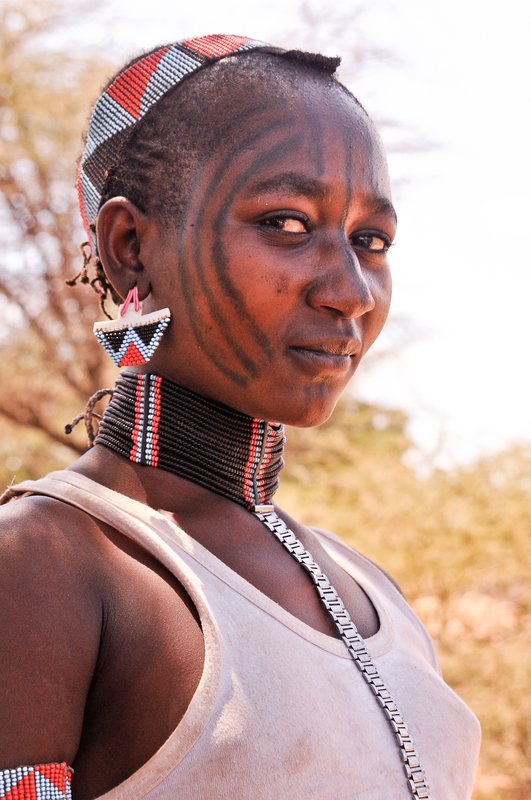 But until then, it is an absolutely astonishing experience to visit these people who lead a life so different from ours. And a great gift to be in their presence. 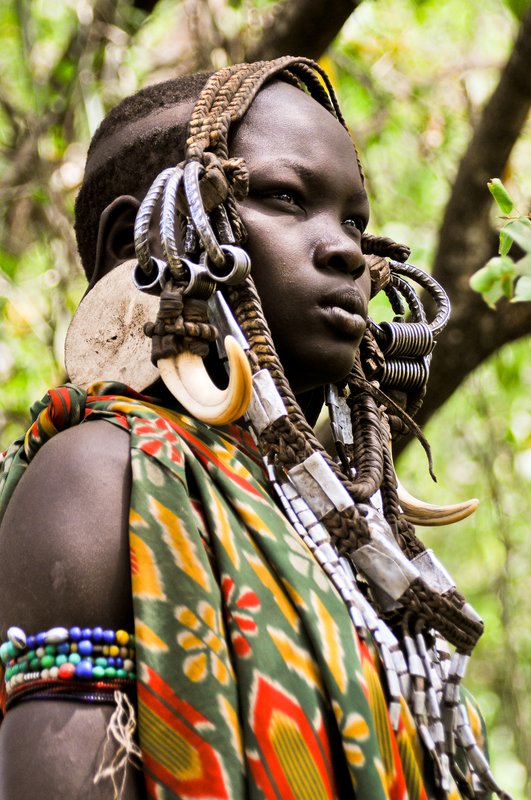 “Faranjo, money!” is probably the phrase you will hear most when visiting Harar. It means “Foreigner, money!” And it seems everyone wants something from you.

Harar is one of the most sacred Muslim cities in the world. But you'd be hard-pressed to call it a city. This ancient trading-post in East Ethiopia, not far from the Somaliland border, seems barely bigger than a sprawled-out market. It's main drawing card is the old town with over 90 mosques, and the colorful people doing business within its walls. 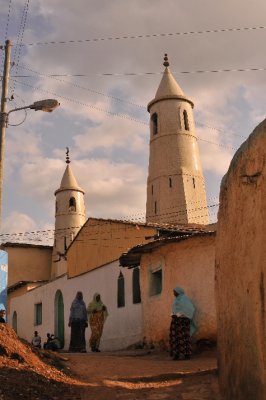 Merchants, peasants and nomads all gather in Harar to sell whatever they can – mangoes, tomatoes, beans, spices, bread, textiles, used clothes, counterfeit items. Anything. Covered-up women in kaleidoscopic patterns walk for miles to reach the city, carrying their merchandise in woven bowls on their heads. Each tribe with their own style and hues . Men and children load donkeys and slowly make their way to one of the many markets.

It's also one of the dirtiest places I've ever been to. Everything is covered in dust. A “water-program” limits water access to a couple of hours in the early morning and a couple of hours at night. The houses in the old town have neither electricity or running water. Stoned men lay on the street, green froth bubbling around their mouths from chewing the narcotic chat-leaves, oblivious to their own poverty. And children play in garbage containers. 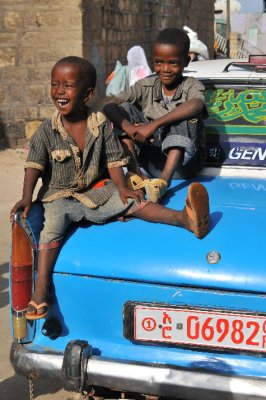 Opportunists abound, all children, men and women want your cash. Eduardo almost got into a fight with a guy who took him to “his” antique store, which wasn't his at all, and then wanted a commission. The true owner of the store knew us from our previous visit, and refused the commission. Outside, I stepped in between the Eduardo and the false owner to break up the fight, while a one-eyed old lady stood right in front of me and begged me for money.

The poverty of this country finally hit me in Harar. Complaining about the cock-roaches in our dirty hotel, when the inhabitants of this town most likely have never slept in clean sheets or in creepy-crawly-free spaces. Realizing that most of these people have never had a hot shower in their lives. Seeing a woman wearing just one shoe, because one shoe is better than none at all.

It's a dirty old town, for sure. But a great reminder of how blessed I am. And how rich I am. And how clean I am (most of the time). And I think I will never complain about anything again in my life. 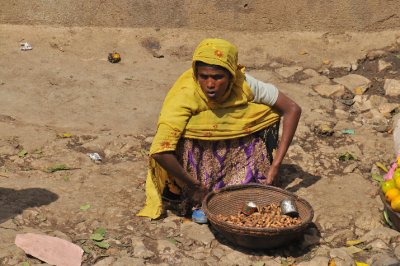 Lalibela's Rock-Hewn Churches Made by Angels

Imagine walking across a hill, and suddenly noticing a huge church in a crevice below you. Not a small church. Not a church constructed by wood, bricks or cement. But a church dug and carved straight out of the mountain. 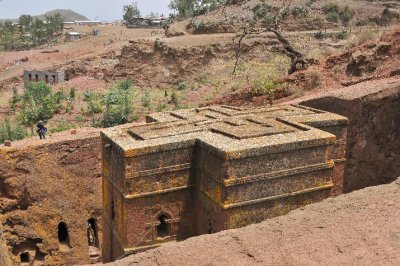 Legend has it King Lalibela, in the late 1100s, was poisoned by his brother and went into a coma for three days. During that time he had a vision of angels bringing him to heaven and showing him the churches he was to construct. When the king awoke, he set out to carve out eleven churches out of the ground below the Lalibela village. He finished this task in just over forty years, in the beginning of the last millennium, without any dynamite, drills or other modern tools. A miracle? The Ethiopians sure think so.

The Lalibela churches are sometimes called the eight wonder of the world, and they should be, even though we had never heard of them before. The sheer size and complexity of them is mind-blowing. Five of the churches are as big as normal churches, 15 meters high (or deep), but they are made in one single piece. 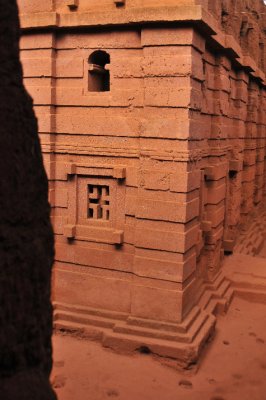 If only the Ethiopian government would do a better job of promoting Lalibela and the other villages on the Ethiopian Historic Route, perhaps this would bring in money to support the suffering population. There is nothing else quite like this anywhere in the world. 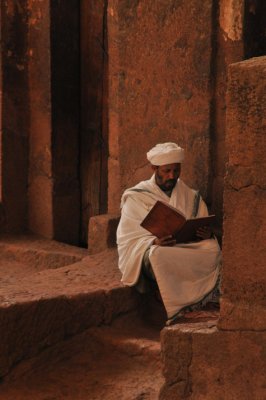 Putting our imagination to work, the construction must have went something like this: Measure out the size on top of the hill. Start digging into the mountain. Carve out a several feet wide valley around the church. Start carving your way into the church. Measure, measure, measure, to make sure the walls are of equal height, width and depth. Make sure all the details, like crosses in the ceilings and ornaments around the windows are of exactly equal size, shape and position. When done, dig another valley around the church to lead off the rain water and protect the church, and add tunnels for easy access to and between the churches. Repeat ten times.

Only a crazy person would attempt to do this.

They say it would have taken 40,000 men to finish the task. Perhaps they brought in workers or slaves from other countries. Or perhaps, as the Ethiopians believe, angels helped build these churches.

“We're lucky, it's raining today! It's the third day in a row it has rained. We are thankful to God!”

Mikael's attitude to the rain differed drastically from ours. We prefer sunshine and heat on our travels. But being in Northern Ethiopia where hardly anything grows, we, too, were thankful for the drops that fell that day.

Lalibela lies high up in the Northern Ethiopian mountains – in the middle of nowhere, really. The village is surrounded by agricultural lands where the locals still use mules for transport, herd sheep and work their lands with hook-ploughs. There's a constant, somewhat sour, smell of burning eucalyptus wood everywhere, as they use it to cook and to heat their homes. In the mornings, the women carry large, yellow plastic containers on their heads to fetch water for the day. Not much has changed in the last five hundred years. 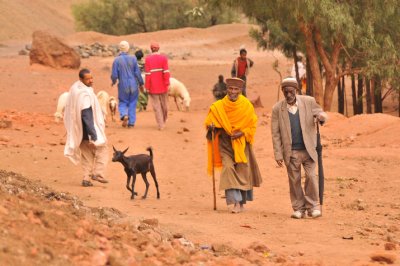 Although the tourist office charges almost $30/person to view the rock-hewn churches, Ethiopia's main tourist attraction, nothing seems to go back to the village. The villagers live in shacks just feet away from the churches. Many children don't have shoes – some don't even have pants! – and they play football with a ball made of rolled-up socks. 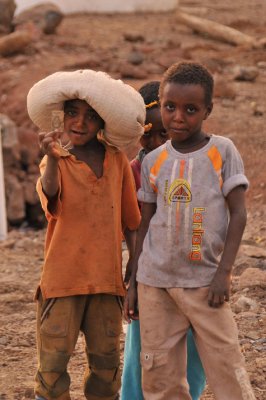 We watched the semi-final between Spain and Germany in a run down, filthy, miniscule bar, filled to the brim with chairs and people, on one of the few TVs in the village. There was an strong odor of stale beer and unwashed bodies. But everyone cheered for Spain, which was great, and of course Spain won!

But despite the destitution, the children in Lalibela dream of a brighter future. They dream of becoming water engineers, pilots, doctors, even the president of Ethiopia. But here's the hook – they all want you to buy them a school book so they can advance to the next level. Everyone's father has died and their mother works in a village far away, so they are all alone. How much of their stories were true, and how much was just tear-jerking stories is hard to tell.