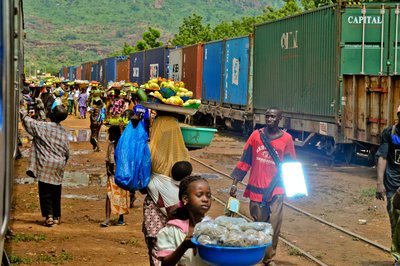 Only a few minutes prior, Eduardo had put up his feet and said: "Mmm... Now that we're on the train, we can just sit van relax for the next nine hours." But it wasn't meant to be. This time, it was our mistake, our error.

The previous night we had arrived at the train station in Bamako to buy the ticket, but the office had already closed. The man in the information booth offered his help:

"I can get you a ticket. If you pay for it now, I'll make the reservation and you can pick up the ticket tomorrow morning."

"But if you wait until tomorrow, you might not be able to get seats next to each other..." he said, pointing to his book of reservations. "I just want to help you. You know, here in Africa we are always trying to help and make things easier for tourists, but if you don't want that..."

He sounded convincing, and I felt bad for not trusting him. We had seen him in the station before, so we knew he really did work there.

"There's no first class, but I can give you two seats each so you can be really comfortable. Especially if you have a lot of luggage. You just pay for first class, but the price is cheaper than paying for four seats in second class."

We did have a LOT of luggage, so we decided to take the risk.

And the next morning, he was there, brought us our tickets and helped us onto the train. Everything seemed just fine. We put one of our huge bags on the seats in front of us, and sat down to relax.

Suddenly there were six men all around us, angry and barking, pulling at our bag in the row in front of us. I stood up and pulled the bag back. I knew what this was about. I was NOT going to pay another dime. It was always about someone making a scandal just to draw a few extra CFAs out of you. I wasn't going to have it.

"You have to put the bag into cargo. You can not have it one the seat," bellowed the conductor, with the other co-conductors, guards, security and policemen standing by. He was joined by the rest of the passengers in the car, nobody wanted to miss the action.

I tried to argue that we had paid for the seats.

"These are not your seats!" More shouting.

"We have paid for these seats, and we are not leaving!!!" I blared.

In the background I heard Eduardo screaming at the police, arguing who is more important and powerful.

The brawl didn't subside until we showed them our tickets, our reservation slip, and a photo of the man in the information booth that Eduardo had taken the week before. Finally they started to understand that we had really been scammed.

And suddenly everyone was on our side - after we had paid $6 for the "extra luggage", of course.

We enjoyed the rest of our trip, quietly, in our "First Class" seats. 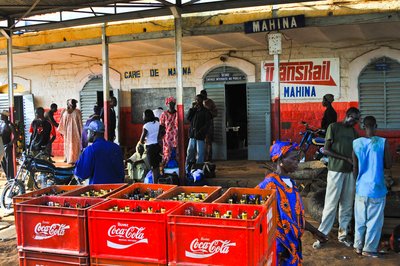