Dogon Country – Wading through Rivers and Up Golden Hills 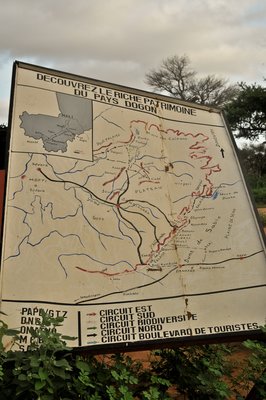 “Where on this map are we?” I asked our guide on our first night in Dogon country. Mahaman pointed to Teli in the Southern part of the Bandiagara escarpment. “But weren't we supposed to start at Dourou?” Mahaman shrugged. “There's too much water there.” 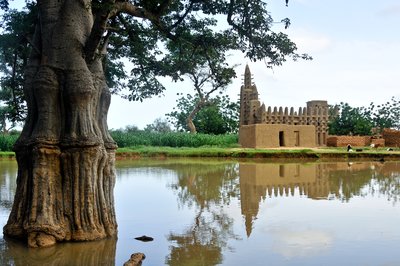 I was furious. While discussing with all the guides before picking Mahaman, we had been very clear: we want to do the stretch between the Youga villages and Tireli, if doable. Mahaman was one of the only ones who said “Yes, no problem.” I wasn't sure at what point he had changed his plan, but once in Dogon, there was no way to change the route. Dourou was 20 kilometers away, or a four day hike.

The problem with Mahaman was that he spoke decent English, but didn't really understand any. When we asked “How come there aren't any monkeys here ?” he would reply “There are mangoes, apples and bananas in Arou. When Eduardo wanted to know “Why do men treat women so badly here?” Mahaman answered “Women can get married when they are sixteen, but men when they are eighteen.” And when we asked to see the cave with the human skulls, Mahaman took us to a souvenir shop where we could buy masks. Even when communicating in French, he would only explain things written in the most basic guidebook. In other words, Mahaman sucked as a guide.

Dogon country was supposed to be the highlight of our visit to Mali. By far the most expensive part of our journey, we figured it would be worth it just to see the “fascinating animist culture with traditions and cosmology as complex and elaborate as any in Africa”, as Lonely Planet describes it. But Dogon, for us, was nothing like that, as we didn't learn anything new about the Dogon culture at all. 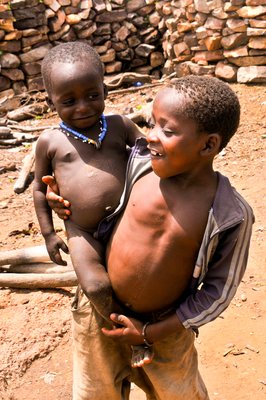 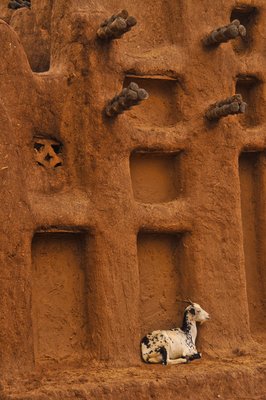 Our discontent grew by the hour. The first night, we decided to sleep inside as the thunder and lightning in the distance threatened heavy rain. But it was so hot in the tiny mud-hut, with only a miniscule window, that we couldn't sleep. Tossing and turning for hours, we didn't fall asleep until the rain finally fell. The peace didn't last long. I woke up from a peculiar sound from inside our room. I turned to see what Eduardo was doing, but he was sleeping. A few minutes later I woke again from the same sound and looked at Eduardo. He was still sleeping. “Eduardo,” I called out, “I think it's raining in...” Eduardo opened his eyes and stared at me. “I know,” he said angrily. “It's raining on me.” The mud roof, as I guess should be expected, was not waterproof. And, no, we didn't get much sleep that night. 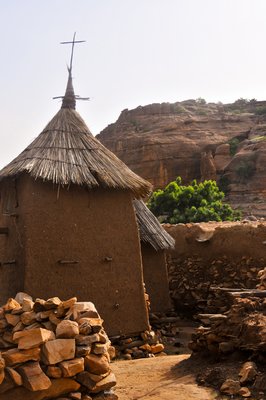 But the landscape was beautiful. Due to the rainy season, the fields were lush, and there were plenty of waterfalls sprouting down the 200 meter high escarpment. Climbing up the steep path to the Benigmato plateau was tough, but worth it. The volcanic red rock obelisks carved by the wind and waters over a million years changed colors with the sun, and you could see across the plains all the way to Burkina Faso. On the third day (and unfortunately the fourth day, as well) we climbed down (and up) a narrow and murderously steep pathway through a crack in the hillside, and enjoyed one of the most beautiful sights we have ever seen. 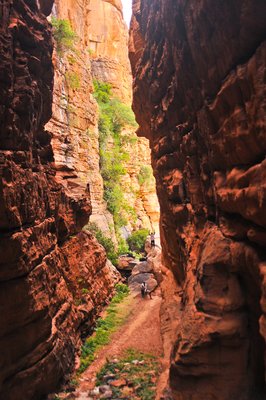 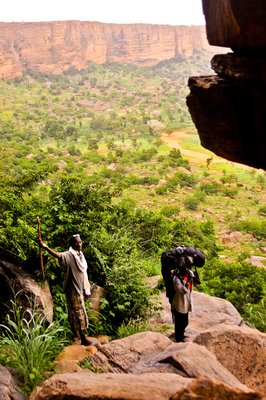 On the last day, when we wondered (again) where the caves with human skulls were located, a Dogon man who only spoke French, Dogon and Bambara, finally understood what we were looking for. He explained that the burial chambers are located in Kundu (where we had originally planned to go). But, to his great satisfaction, and our big surprise, he opened his bag and unwrapped a package that contained – a human skull! Photo opportunity, at last! He just didn't understand why we didn't understand why we didn't want to buy it. “On peut acheter. Ya pas de probleme!” he kept repeating.

Back in Mopti a couple of days later, we met a guide that actually seemed to know his stuff. He was born and bred in Dogon, spoke good English and could answer any questions we had about the Dogon cosmology. We almost considered going back and taking another tour with him, but decided not to because of the heat. If anyone needs a Dogon guide, we warmly recommend him: Seck Dolo, seckdolo@yahoo.fr

Mahaman, although really a nice and caring person, kept disappointing us. At the end of the trip we made a deal; I would give him my Peru football t-shirt, and he would give me a traditional African outfit. I kept my part of the deal, I'm still waiting for his... 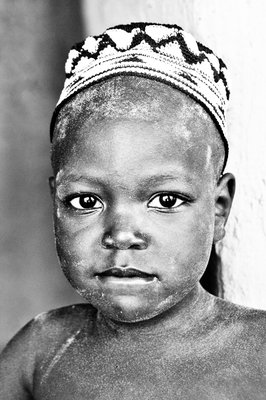