Elvis may be the King of Rock, Michael Jackson the King of Pop and Bob Marley the face of Reggae. But few people have influenced contemporary music like Fela Kuti, the founder of Afrobeat.

In the seventies, international megastars like Paul McCartney and James Brown made pilgrimages to Lagos to soak in the vibe of Afrobeat. This was an entirely new sound,. Even today, bands like Brooklyn's Antibalas, Akoya, The Budos Band and the London Afrobeat Collective still pay homage to the now deceased Fela Antikulapi Kuti. And the musical “Fela!” is currently making waves on Broadway.

Our new best Nigerian friend, Lolade, grew up a couple of blocks from Fela's house. As a child, she used to see him, smoking weed on his balcony in his underwear. So, when we knocked on Fela Kuti's door, his widows happily invited us in. They felt that Lolade was one of them, a Yoruba. And with a few hundred Naira in their pockets, everyone was happy we came.

Fela Kuti lies buried in a pyramid-like tomb outside his crumbling four-story house in the Ikeja suburb of Lagos. But inside his house, his spirit still lives on. At 11 o'clock in the morning, the house is filled with marijuana smoke, and the forty or so people loitering are all feeling goooooood, no matter if they're ten years old or seventy. Two of Fela's twenty-seven (!) wives haven't left his side, thirteen years after he passed away. Hungry for money – or just hungry – they flatter, kiss, and grab your butt to squeeze a couple of dollars out of you.

On the second floor, Fela's dusty shoes are exhibited behind a glass screen, but no one has tended to them for years. A huge drum and a piano are pushed into a corner, and in one room there's a place no one should touch, because that's where Fela used to sit while holding court to all his wives. Or is it because the floor is falling apart, and if you step on it you might fall through the floor?

A couple of nights later we went to see Fela's son, Seun Kuti, perform at the Terra Kulture. Having made friends with his posse a couple of days earlier at his father's house, we got to meet Seun backstage before the show. Seun took us into a side room, and while he was getting his instruments ready, he kindly engaged in a long conversation with us. 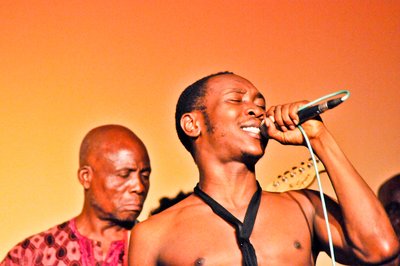 Seun said that when he grew up, there were always a “shitload of people” around, maybe 500 or so, in the Kalakuta Republic (Fela's house). There was always music playing, everyone was smoking ganja, and people were quite happy.

Amazingly, Seun is the spitting image of his father. As a performer, he sounds a lot more than Fela than Femi, his more famous brother. When Seun wriggles around the stage, contorting his body, it's easy to forget that it isn't Fela standing on the stage in front of you. Seun's powerful charisma sweeps you along. When he sings about corruption in the government you agree, when he says that marijuana is the best thing in the world, you find yourself nodding enthusiastically, no matter what you thought two minutes earlier.

The music overtakes you. The horn players blow their souls into their instruments, expanding the walls of the room and creating a perfect symphony. When the two female dancers shake their butts in mega-speed, you find yourself enjoying the moves, no matter how sexist they may be. It's impossible to stand still. Your feet start tapping, and soon enough you'll be swaying your body rhythmically on the dance floor, becoming one with the music. 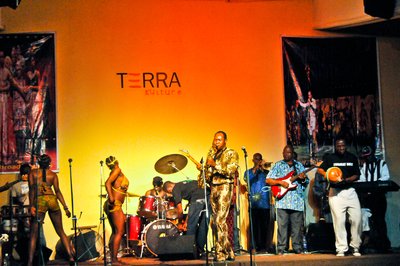 We saw Seun live in New York's Central Park, a couple of years ago, but seeing him perform in his own hood, in front of his local crowd was a totally different experience.

It was an amazing concert, a once in a lifetime experience, and one we will never forget. 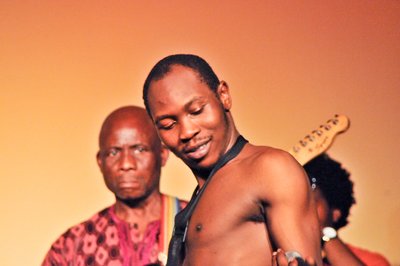