On the plane back home, we tried to summarize the trip. Apart from the difficult moments and screaming matches, it had been a fantastic trip that we would never forget. And it had changed us.

Somewhere along the way, in Ethiopia, I had decided that I would never complain again. It seemed ridiculous to grumble about deteriorating subway cars, expensive food and tight living quarters when so many people have so much less. We had met people who had nothing. Children who would never have a chance in their lives, because they were born into a family of twenty, with the only purpose of bringing in extra income to the family.

Then we remembered the unbelievable hospitality of the friends we had made in South Africa and Nigeria.

And we talked about the fascinating tribes in the Lower Omo Valley with big ceramic plates inserted in their lips, and the churches that were dug out of rocks in Lalibela.

We reminisced about the Tuaregs in Niger, who a few weeks after our visit kidnapped five French people in Arlit. Well, maybe not the actual Tuaregs we had met, but perhaps their friends.

People had said that West Africa is the most difficult place in the world to travel, and after this trip we could only agree. It's a tough place with tough folks. There are no sights to speak of, and the public transport had to be the worst in the world. We had met so many aggressive, angry men and women. But it had also opened our eyes to how poverty, perhaps understandably, can bring out the worst in us all.

We also knew that through these experiences we had grown a lot closer as a couple, knowing that we would always stick together no matter what.

It's funny, as I was looking through the window on our drive home from the JFK Airport, New York City actually looked clean and organized. Well, that was a first!

And when our friends and family ask; was it worth it? There has to be a resounding yes. It was totally worth it. But would I ever do it again? Never.

However, after a few days of rest we couldn't help but start thinking of our next trip. What's next? Asia perhaps.

Blink, and blink again. If you didn't know better, you would think you were in Old San Juan, Puerto Rico. The cobble-stoned streets, the pastel-colored colonial houses and swaying palm trees make Île de Goree look like a twin sister of the Puerto Rican town. Even the climate is the same; hot and humid. 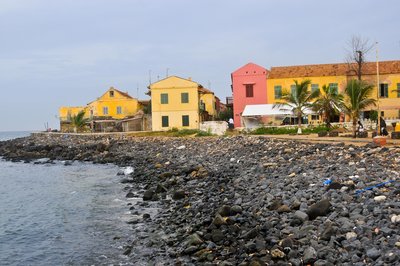 Like San Juan, the island of Goree was colonized by the Europeans 500 years ago. And just like its Caribbean counterpart, Île de Goree soon became a center for the slave trade. It is even possible that African slaves left Île de Goree only to land in San Juan.

Today, this island near Dakar is best known for the Maison des Esclaves. In this museum you can enter the cells where slaves were held before they were shipped to unknown destinations across the great ocean. Signs depicting "Women", "Men", "Children, testify to the rigid organization of the merchandise. And a door at the back of the house eerily leads to the open sea; The Point of No Return.

Above the town sits the Castel. Although the ancient French fort currently serves as a market for local art work, they haven't removed the massive World War II guns from the times when the French used the fort to protect their Senegalese stronghold. 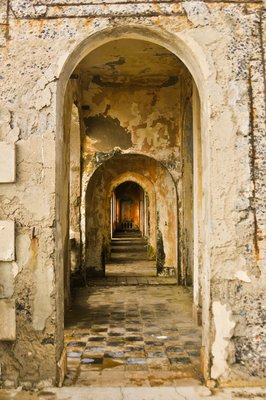 But the real action happens in the village below. Along the narrow streets, in the shadows of sweet smelling bougainvilleas, the island's inhabitants lazily offer colorful bead necklaces, paintings, handicraft. Everyone sells the same knickknacks. 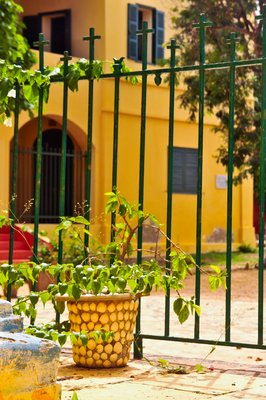 And on the beach, close to where Dakar boat docks, local and foreign children joyfully jump in the waves of the clear and cool water. Only steps away, tourists devour fresh seafood dishes in the many restaurants lining the port. Many visitors who come for a day, end up staying the night. It's that kind of a place. 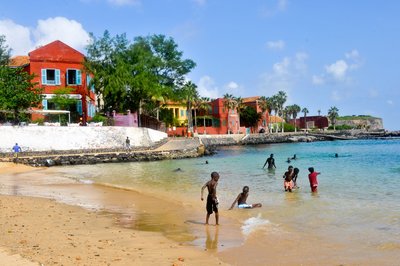 Palmarin - A Deserted Beach at the End of the Road

"How do we get back to Dakar?" we wondered as soon as we got off the sept-place taxi. Palmarin, the small seaside village on the border of the Siné-Saloum Delta looked like the end of the world – a boring hole. It didn't matter that it had taken us six hours on potholed roads to get there, and that the last hour the taxi had been stuck in the middle of a field in torrential rain. We just wanted to leave. But with no taxis going back before next morning, we had no choice but to stay. 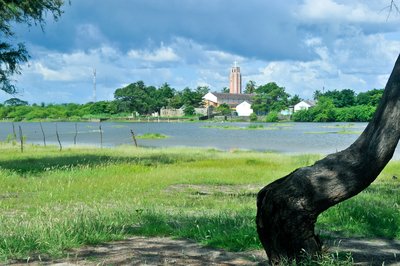 Half an hour later we were sitting atop a flat, horse-driven carriage, taking us through the flooded streets of the seemingly deserted village. We rode across a deep, seasonal river and the along an endless stretch of a perfectly white beach to the isolated cluster of huts of the Yokam hotel.

As soon as we saw our surprisingly clean and comfortable hut, we changed our minds about Palmarin. It might be the most peaceful place in the world, and extremely boring as such, but it might just offer the rest we so badly needed. And no hustlers as far as you could see! After a cold Flag beer accompanied by a grilled fished and a fresh salad had restored our energies, we started to feel quite comfortable among the flooded huts. 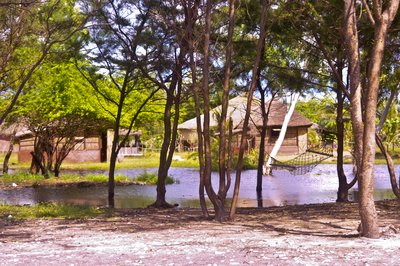 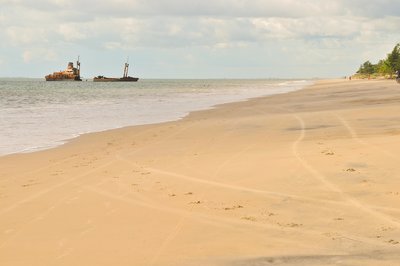 That night Francois, the owner of Le Yokam, invited us to a party. All the female singers and dancers of Palmarin had gathered to celebrate the height of the rainy season. We sneaked into the candle-lit hut where the ladies were drinking beer, singing, dancing and drumming the night away. But pretty soon I was pulled onto the dance floor, where I shook my butt in my best improvisation of a West African dance.

Before going to sleep, Eduardo and I decided to wade through puddles past bushes and trees to the beachfront, guided only by the moonlight. We sat down on a bench, watching the waves coming in higher and higher with the tide. The fresh wind cooled us from the daily heat, as the sweet smell of salty water refreshed us. A shadow of a horse and carriage drove by in the dark, neighing a quiet hello. 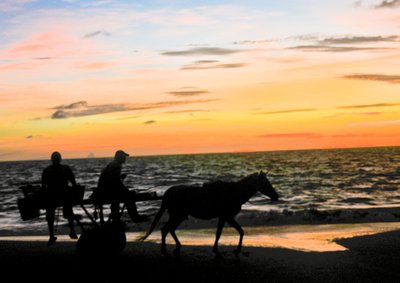 Reluctantly, we sauntered back to our steaming hot hut, where we tossed and turned until morning, dreaming of air conditioning... 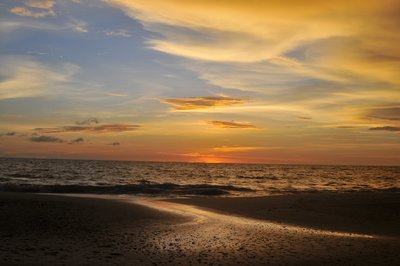 I could almost hear a piano softly playing in the background. The scene unfolding was eerily reminiscent of the movie, The Piano, set in New Zealand in 1850. Of course, this was 2010 in Senegal, and the rhythm of life faster, more abrupt, hungrier, and perhaps even more alive.

The fishing boats coming in before the sunset were unloading their daily catch. Buyers walked into the ocean with buckets on their heads, striving to get there first, yearning to buy the goods that would keep their families alive another day. A man drove his horse and carriage deep into the sea, the horse kicking and gasping for air, barely able to stay above the water while his master negotiated the price of the merchandise.

Women, children and merchants, all waited on the beach. A young boy sold pieces of coconuts, others hustled fruits, meat, plastic bags, shoes – anything anyone might want to buy. They seemed to have waited for hours, knowing that the end of the day was their chance to make their daily bread, to earn enough to fill their stomachs.

The ones who managed to reach the boats first, retreated contently with their bucket-load of fish to the market on the shore , or drove their catch to the luxury restaurants along the beaches.

An hour later, as night crept over the shore, the scene had died and the only trace left of the previous commotion was an odd fish head or two. And if you listened closely, the vague sound of a piano tinkling in the wind.

Saly - The French Riviera in Senegal

Mile long stretches of golden sand, swaying palm trees, treasure hunts for the perfect seashell, and of course the quintessential frozen margarita... This could be a description of any beach escape in the world - the Caribbean, the Canary Islands, Thailand, and, oh! of course, the French Riviera. Because in Saly, it' easy to forget you ever left France; everyone speaks French, all signs are in French and almost all businesses are owned by the French. 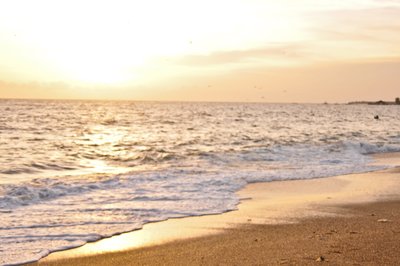 A mere hour south of Dakar, Saly is the ultimate rest stop for the weary traveler, whatever the budget. Luxury hotels offer on-the-beach accommodation and secured, fenced-off recreation areas for the cautious tourists who fear mixing with the locals. For the ones with thinner wallets, ten dollars gets you a clean ensuite room only steps away from the beach. There are also a myriad of restaurants, bars and nightclubs for every taste and fancy... You name it, Saly, like any seaside resort worth its name, has it all.

In Saly, it is easy to forget you are in Africa – that is until you encounter the persistent hustlers, ever looking to make an extra cent. They seem to be everywhere, always shouting out a "Bonjour!", "Cava?", "Hello!", "Buenos Dias!" or the frustratingly dilapidated "Frances? Espanol? Italien? Aleman? Ingles?" My parents would cower in shame at my conduct, they clearly raised me better. But the only way the hustlers will leave you alone is if you completely ignore absolutely everyone you meet. Forget being nice. If you give anyone the time of day, be it a look, a nod, or just meet someone's gaze for a second, they will follow you around for an hour. And once they give up, another hustler will take his place within seconds. 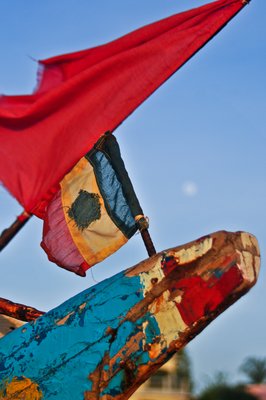 Once you learn to be rude, Saly is a haven. The fruits are fresh, the grilled seafood delicious, and the colorfully painted fishing boats perfect subjects for sunset photographs.

It's no wonder that all the French seem to want to retire in Saly. 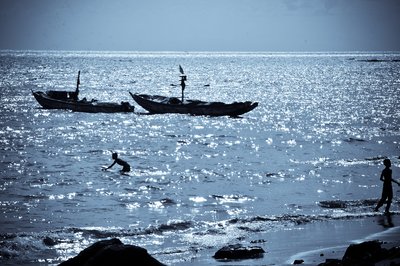